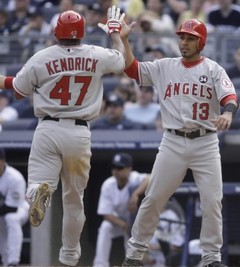 When you try to think of one word that can describe Howie Kendrick‘s offensive production for the Angels this year, what words come to mind?

No matter how you slice it up, Howie Kendrick needed to be sent down to Triple-A ball. In my opinion, this move was made a month too late.

Howie on the year is hitting a depressing .231 for being regarded as one of the best pure hitters to come out of the minor leagues in recent memory. Heck, he hit over .360 in his 4 minor league seasons altogether.

Kendrick hit an even lower mark of .193 during the month of May. And the fact that he’s drawn only 10 walks in the 51 games he’s played in, it’s not like his on-base percentage of .281 is going to give Scioscia a reason to keep him in the bigs.

Take the postseason for example, a time of the year where all the lights are on him to produce, and he shuts down. In 2 postseason appearances, Kendrick has amassed 4 hits in a total of 27 at-bats, good enough for a .148 batting average. In last year’s postseason series against the Red Sox, Howie compiled 2 hits in 17 at-bats, while striking out 7 times and drawing no walks.

To put it lightly, he just hasn’t been able to find his swing so far this year.

Thankfully, there is a “replacement” who I’m excited to see get regular starts in the field as well as at-bats.

That somebody is 28-year-old Maicer Izturis.

Maicer was acquired by the Halos back on November 19th, 2004 along with Juan Rivera from the Expos/Nationals (whatever they were at that time) in exchange for the talented but ticking time bomb named Jose Guillen.

Although Izturis is listed as a shortstop, he has also filled in time valiantly at both the 3rd base and 2nd base positions. Mike Scioscia is confident to put Maicer anywhere in the infield because he is as sound as they come with the glove.

Standing in at 5’8″, Maicer isn’t the prototypical shortstop people think of. He doesn’t have that incredible range, doesn’t necessarily have the strongest arm, that kind of thing. However, although he may not be great at one thing in particular, he is good at everything else.

He has made countless plays in the field this year that have gone straight to ESPN’s Top 10 Plays or Baseball Tonight’s Web Gems. He reads the ball great off the bat, always puts himself in great position to make a play, and always seems to deliver a great throw to finish the play, whether it be from 3rd, short or 2nd base.

And at the plate, while Maicer may not be the guy who hits over .325 in the lineup (.273 career hitter), or club countless home runs (career high in HR’s is 6), he does virtually everything else.

Although he’s a career .273 hitter, his batting average seems to skyrocket any time there are runners in scoring position or if it’s a late-in-game or pressure situation (pretty much the polar opposite of Kendrick).

He puts pressure on the defense because he can run well, and does a great job of spraying the ball to all fields from both sides of the plate.

Ever since Mighty Maicer’s come to Anaheim, he hasn’t ever been able to really call himself an everyday player for Mike Scioscia’s ballclub.

In 2006 after centerfielder Darin Erstad hit the Disabled List, super utility man Chone Figgins was moved into center for the time being, opening up 3rd base for Maicer Izturis where he established himself as an incredibly capable defender worthy of more playing time (he ended up starting 78 games at 3rd in ’06).

In 2007, the Angels (much to my and many Angel fans’ current dislike) forked out $50 million dollars for centerfielder Gary Matthews Jr., fresh off an All-Star 2006 season. This forced Figgy back to 3rd, and Maicer back to being the odd man out. He once again became the space-filler for whenever any infielder would go down with an injury (mainly the oft-injured Howie Kendrick at 2nd).

Maicer suffered an injury-plagued 2008 campaign, but in his 52 games at shortstop throughout the season, he only committed 2 errors, good enough for a fielding percentage of .991 (translation = pretty damn good).

Now, he finds himself being the space-filler until Howie can find his swing, and the way we’ve seen Howie swing the stick this year, that could be quite a time-consuming search.

In his 1st start replacing Kendrick at 2nd base on Friday, all he did was go 4-for-4 with 2 singles, a double and a triple, as well as an RBI and 2 runs scored. He followed that up with a 1-for-3 showing Saturday night with a double and a run scored, all while playing spectacular defense at 2nd base.

And if I may add, man do Maicer and Erick Aybar make a pretty double-play tandem! Maicer and Erick compliment each other perfectly in my opinion. Aybar has arguably the most range of any shortstop in the major leagues and can make some incredible acrobatic plays (he’ll get to balls that Maicer has no chance of getting), let alone the fact that he’s got a cannon for an arm. However, all these incredible plays mean that he’s more susceptible to errors. Maicer makes every play look routine and is very consistent in the field.

I’m excited to see what this new lineup will do on a regular basis. It’s been pretty damn good so far, they’ve posted 20 runs in the first 2 games with this Kendrick-less lineup.

The lineup and overall defense can only improve from this move.

So Howie… take your time, buddy. No rush.