From Scapegoat to Unsung Hero 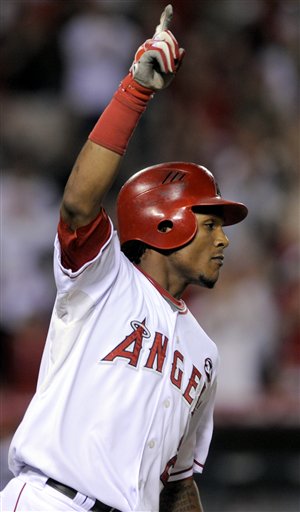 Although the Angels’ 2008 season ended on a walk-off hit by the Red Sox, many remember it ending with Erick Aybar at the plate.

With 1 out and a pinch-runner Reggie Willits on 3rd, Mike Scioscia opted to win or lose by doing what they had done all year… play Angel baseball.

A suicide squeeze was the call, but when the pitch ran up inside on Aybar and he couldn’t get the bat on the ball, Willits, like the rest of the team, was done for. You could feel the momentum shift away from the Angels, it was that monumental. Pack it up. Head home. Season over.

One could only imagine what had gone through Aybar’s head on that flight home, and for the entire offseason for that matter. Many people (including myself) blamed Aybar for ending the Angels’ postseason run. Many people blamed Mike Scioscia for putting on a high-risk play in such a crucial situation.

When a suicide squeeze is called, the manager puts the absolute utmost confidence in the batter to at least hit the ball into the field of play, because if not, the runner is a sitting duck, and the team squanders a potentially vital run-scoring opportunity.

But, as the great Mark McGwire once said, “I’m not here to talk about the past.” It’s time to recognize what’s been going on in the present day.

Since day 1 of  being part of the Angels’ system (just like that fateful at-bat in Boston), the club had invested the utmost of confidence and placed immensely high hopes in this “Aybar kid”. He’s quick, he’s a slap-hitter, his range in the field is jaw-dropping, he’s acrobatic, you name it. Over his minor league career, Aybar hit at an impressive .312 mark. When he was 20 years old, he stole 51 bases over the course of his season in Advanced-A ball.

Management had touted Aybar as a player where “the sky’s the limit” for him in terms of potential and the type of player he could grow to be.

An improvement, yes, but me like plenty of other Angel fans out there were missing something. If this kid is supposed to be “so good”, don’t you think he could lay a suicide squeeze down? You’d think. This guy’s our future everyday shortstop? Yeah right.

As you can tell, I was not impressed with Aybar whatsoever since he had been called up to the Angels’ big league squad. I had seen flashes of him being who the Angels hyped him up to be, but he was way too streaky. He’d go on a tear for a few games with the bat, then go ice cold for a week. Consistency was nonexistent.

A redemption year for Aybar, if you will. And a year where I finally understand why the Angels’ front office loved this kid so much.

To start the season, I was hoping they would give the starting shortstop job to Maicer Izturis, a guy who was consistent, clutch, and more proven to-date. But Aybar had put forth a better spring training than Mighty Maicer, and was the Opening Day shortstop for the Halos.

Erick would hit at a disappointing .245 mark over the course of the opening month, which had me somewhat furious why Mike Scioscia kept putting him in the lineup.

He would hit .303 during the month of May, which made me a tad bit happier. His season average was just a shade under .280 after 2 months of play… not great, but not horrible either.

June gloom hit Aybar pretty hard as he batted a mere .256 during June, but then Aybar would turn on the jets.

EA had an absolutely unreal month of July. So good in fact that he had the highest batting average of every starting position player in the entire league over the course of the month.

What did he hit, you ask?

.414. Let that soak in for a moment, do a double take if you need to, you’re reading it correctly.

In a double-header at Kansas City, Aybar collected 7 hits (yeah… 7 hits in one day!) by going 7-for-9 with 5 runs scored! I don’t know if you could draw up a more successful day of baseball for one player.

His batting average has dipped below .300 once since July 19th (September 4th’s game with the Mariners capped off an 0-for-20 slide… which brought his average to .299).

But as much as he’s been letting his bat do the talking, his work at shortstop has been nothing short of sensational.

Entering 2009, Aybar had possessed unbelievable range in the field, meaning he could cover so much ground that he would almost always get a glove on a ball hit in his general area. He has a cannon for an arm despite being just 5’10” and 170 pounds. But he had always been erratic. For every highlight reel play that he’d make, he would counter by messing up the simplest of grounders.

But as in almost every aspect of Aybar’s game, 2009 would be a new season.

This year has proven to be a “make a name for myself” type of year for Aybar. He would routinely make plays that even the best of shortstops could only dream of making. He’s been making appearances on SportsCenter’s Top 10 plays of the day feature seemingly every other day.

At this juncture, I don’t think I could be any happier for Erick.

Nearly 11 months after a potentially career-defining blunder at the ripe age 0f 24, he’s helping erase Angel fans’ unforgettable memory of his ALDS Game 4 mishap by playing the best ball of his career.

And although 2009 has been a year that has shown me a lot about individual players (Torii Hunter, Kendry Morales, Aybar, Juan Rivera just to name a few), but more about what this team is really made of.

This team… is a team of destiny.